In celebration of 75 years of their history St John Scotland commissioned a project to capture their history and charitable work since 1947. St John Scotland have been a longstanding supporter of MRTs in Scotland. They have generously given millions in funding, mainly through the provision of bases and vehicles helping MRTs to save lives. Members of Scottish Mountain Rescue were interviewed for the project and we are delighted to share the project which includes these interviews and captures St John Scotland’s support of Scottish Mountain Rescue.

Here are a couple of excerpt from the interviews:

“As the years went on, I think [St John Scotland] obviously decided that Mountain Rescue was a very worthy cause in terms of their objectives, and Bill [Marshall], and subsequently myself when I took over as Team Leader in 1993, were involved in supporting them, going out to other Mountain Rescue Teams and basically trying to persuade rescue teams that having a connection with [St John Scotland] would be a really beneficial thing for them, because out of that, the likelihood was they were going to get support.”

“At that time, the team was based in a double sectional garage behind the council nurseries in Menstrie; this was basic to say the least, without running water, toilet, and with four plug sockets to charge the torches! In 2006, the team started the journey to build a purpose-built Mountain Rescue Post, and due to a large number of setbacks and problems, the new post was [finally] opened by HRH The Duke of Gloucester in 2010 with the build costs fully met by the St John Scotland.” 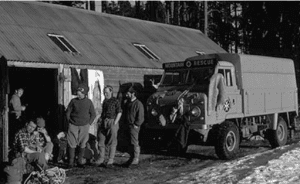 The project has resulted in a book, a video, exhibition materials, and a dedicated website, where the full oral history archive will be accessible for the future. 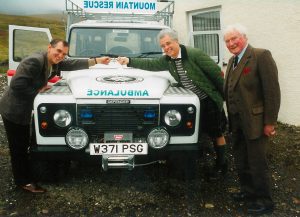 Copies of the book are available to order for just the cost of postage and packing – visit the website for more information.

The dedicated website, with the full oral history archive and other fascinating resources can be visited here: sjs75years.org.uk

“Scottish Mountain Rescue were honoured to be asked to participate in the celebrations of St John Scotland’s 75th Anniversary. The unprecedented support from St John Scotland, currently in the region of £4 million has made a major impact on Scottish Mountain Rescue teams in the form of bases and vehicles for each team. This level of support has enabled teams to be better equipped and better able to save lives. We send St John Scotland our very best wishes for the next 75 years and our continued partnership”