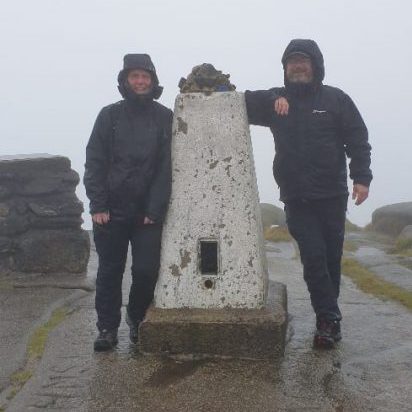 Tell us a little bit more about yourself?

Myself and my husband enjoy being in the outdoors.  A few years ago we decided to start visiting the Scottish islands. I like the challenge of the hills and I think my hubby just goes because he has no choice but he does enjoy it. We’re are not Munro baggers as we have only done two munros, we just like to take in the views.

What were the circumstances that led up to the rescue?

We started off walking from the distillery on Arran.  It was beautiful, lovely views after the trees. The further up we got the more the weather was making it harder to see. As we were near the top we decided to keep going. Eventually we got to the top. There were no views, so we took a quick picture and had a quick bite to eat before heading down. The weather began to close in and we couldn’t see 5 feet in front of us. We kept looking for the path. We went up and down, and up and down, everything just looked the same.  We must have done this for an hour at least. We were soaking wet and cold, the weather was getting worse.  After some unprintable words, we called for help.

When you realised it was an emergency and you might need help, how did you feel?

When we knew we we’re going nowhere fast, we couldn’t see and it all looked steep and dangerous. I felt stupid and angry and obviously blamed my hubby. He was calmer than me I have to say.

How did you call for help/involve the mountain rescue?

We sat down and decided we would call for help. We didn’t initially call the police because we weren’t sure what the procedure was. We called the Arran distillery as that was where the car was parked. The owner was fantastic, told us not to worry, took our number and said he would get us help and everything would be ok.

Note from SMR: In an emergency call 999, ask for Police, then ask for Mountain Rescue

How did mountain rescue help? What actions did they take and how did you feel throughout the rescue?

We got a call from Arran Mountain Rescue Team five minutes later, they spoke to my hubby and told him what they were going to do. They pinpointed our location using sarloc, told us not to move and that they were coming for us. They said they knew where we were, so told us to hunker down and try to keep warm. Once the Mountain Rescue Team got to us I started to cry I was so emotional. The Team were amazing, so lovely, caring and very professional. I felt so safe and relieved. They kept talking to us asking if we were ok all the way down.

What was the outcome of the rescue?

We were rescued, and got off the hills safe and well.

What difference did this make to you?

I felt humbled that these volunteers are willing to put their own safety on the line for you. They stop their life for you.

How did you feel about the support that you received from mountain rescue?

Mountain Rescue as the angels of our hills watching over us keeping us safe. Never far away.

How did the rescue impact on your life?

It made both realise that you can’t take things for granted. This could have ended so differently.