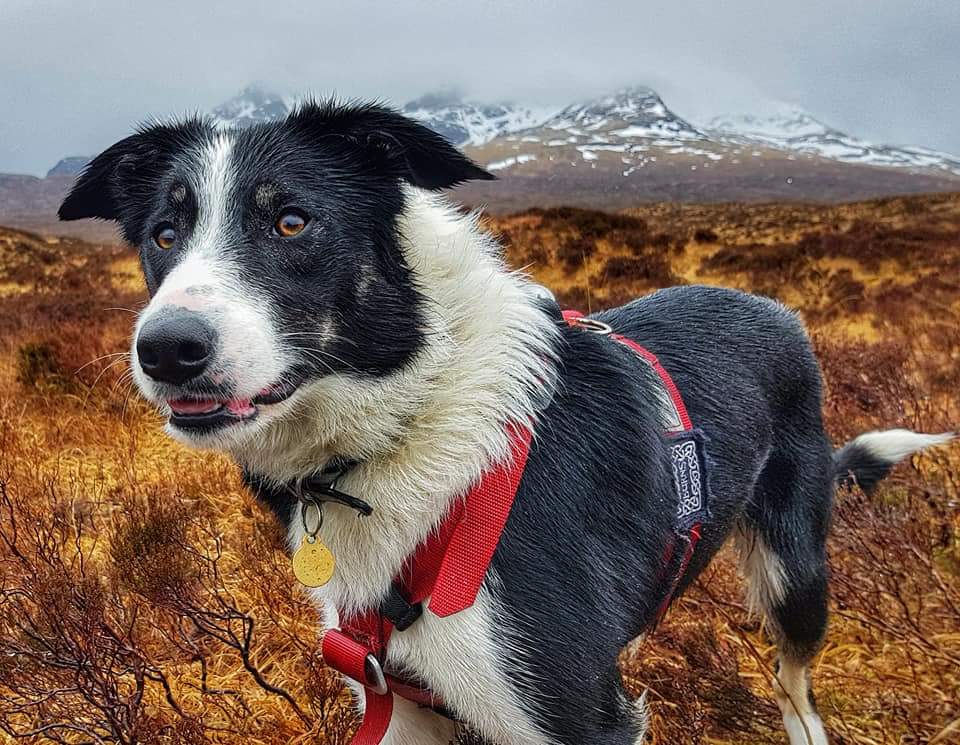 Rauour is an air scenting search dog who uses his incredible sense of smell to locate missing and injured people in mountainous terrain. Due to his exceptional doggy skills he is also deployed in support of the police during missing people searches in semi urban and rural areas.

Rauour was awarded a PDSA commendation for his work on a Tweed Valley callout on 28th of February 2015 to find a missing person that was thought to be at considerable risk. He was only three at the time.

In 2015, the Met Office had issued an amber weather warning for snow and blizzard conditions. Rauour and John had been called out to search for a missing person. The team had been searching for two hours before Rauour and John got there and still no sign of the missing person. Two minutes into the search and Rauour started barking signalling to John he had found something and he wanted John to following him. Rauour had found the casualty.

Quote from the Scotsman, “Rauour had discovered the casualty: a woman trapped in the hole of a tree root, with only her legs visible. She was unconscious and suffering advanced hypothermia. The horrendous weather conditions, darkness and position of the victim meant that foot crews had passed by her location hours earlier without finding her”.

John said, “Rauour is a great dog to work with, to him every search is another game and his enthusiasm, energy for the task wherever we are , to do what he does for a play with a toy at the end seems a bit cheap for what he does. Being a handler means you can be called out at any time day or night, he knows the text tone an is always first out of the house and in the car.”

Cranna was a rescued dog before she became a Rescue Dog. She was abandoned in a car park, left tied to a car

bumper and handed in to the local kennels by the dog warden. The kennel owner knew Ken was looking for a dog to train as his third Search Dog so he took her on. She was a natural talent at search and progressed quickly to assessment where she qualified in March 2014 winning the Madras Trophy as best Novice Search Dog that year. She is happy to be deployed by any means available including Helicopters. When not on Rescue duties she is very much one of the family pets.

Cranna has been part of the team for 5 year – qualifying as a Search Dog in March 2014. Cranna is able to effectively search large areas day or night. She can free up resources by allowing a wider area to be searched than with Team members alone. She is particularly helpful in Avalanche situations as she can detect a buried casualty many time quicker than Team Members using probes or even transceivers.

An incident where Cranna was a huge asset to the team was New Year 2019, Cranna was able to search dense areas of wind blown trees during a 5 day search for a missing person. It would have been extremely difficult for Team Members to search those areas.

Ken said, “It is very rewarding to be able to combine the love of dogs with the passion for Mountaineering and in particular Mountain Rescue. It is tremendously rewarding when the training and time you have put into a dog results in the saving of a life.”

Age: 2 and a half years old

Jib qualified as a ‘Novice’ dog at the March 2018 annual SARDA assessment, winning the Madras College trophy (an

award for new novice dogs) for that year. She has been operational since then and we have assisted with several searches in various parts of Scotland.

As with other SARDA dog units, Jib & her handler operate as an independent team, co-ordinating with other teams nearby to ensure complete coverage of search areas. Air-scenting dogs like Jib are simply looking for any human scent, so we can deploy immediately on arrival at the search area.

A single dog’s energy and sensitivity to scent allows it cover ground far more quickly than a team of several humans, who must rely on sight and hearing. The dogs can also locate buried avalanche victims, or indicate areas of interest that might need technical equipment for humans to access for further investigation. All this frees up human assets that search managers can then use in other key areas.

Jib is young and relatively early in her career, so beyond what has been described above there is not any specific story of valour or humour (give it time!) However all dogs provide a huge boost to the area that can be searched per hour, so improving the chances of a good outcome. On a long search the friendliness of the dogs usually helps lift the spirits of other searchers we meet too.

Jibs handler said, “Being a handler is great! Search dogs are not just assets, they are also companions just as with every other dog. It’s probably slightly different to some pets, as Jib needs to be confident enough to think for herself and to roam away from me searching independently while still responding to me if needed – but these are things that are built up slowly through SARDA training and the level of trust and understanding between dog and handler is really rewarding. I’m sure anyone that works a dog in any way shares this experience.”

Search dogs are friendly and can be noisy when they find you, because to them it’s all just one big game. So if a search dog ever finds you (even if you’re not in distress), don’t worry if they start barking and please stay where you are even if they dash off – they’ve just gone to fetch their much slower human handler, so give us a few minutes to catch up before you decide to move on! The dog deserves a reward for finding you even if you’re not the person being sought, so the handler might ask you to help by playing with the dog when they do catch up. Search dogs will usually be wearing a marked coat or harness and have an ID tag identifying them as such, so it should be pretty obvious they are not just somebody’s pet come over to say hi!

The Importance of Planning for your Adventures