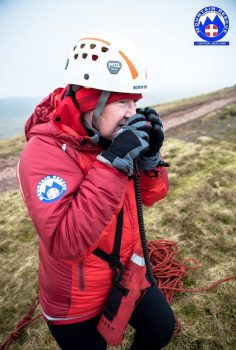 My name’s Kate, I’ve been a member of Central Beacons MRT in South Wales for 8.5 years, and I’m currently the team’s Training Officer.

In February 2008 I had a minor accident in Scotland when I was on a winter skills course: I slipped on wet rock in the boulder field at the bottom of the coire where the skills course was taking place and broke my fall with my nose and forehead, suffering facial injuries along with a rather large bruise on my thigh. Galloway MRT were out on exercise and came along a couple of minutes after I’d fallen, introducing me to one of their team members, who happened to be a paramedic. The team member was very happy to have a real mountain casualty (he said the team doctors usually nicked the best ones), and I was very happy to have a paramedic patching me up and checking I was ok.

Galloway gave me the option of being stretchered off or walking off with assistance, but recommended the latter (and having had plenty of experience of the Bell subsequently, I’m glad I went with walking!) A couple of the Galloway guys then assisted me down to the ranger station, though they did cheekily put in their website report that they’d stretchered me off the hill!!

After a load of stitches in my forehead expertly sewn by the GP, the Harry Potter scar has now faded, and my nose is back to its beautiful form courtesy of University of Wales Hospital Cardiff 🙂

Galloway had a couple of SARDA dogs with them and as an avid dog lover I was desperate to meet them, but was too busy being the casualty. Friends afterwards suggested SARDA dogsbodying when I suggested I’d like to give something back to Mountain Rescue. Dogsbodying then led to joining Central Beacons as a hill member and I haven’t looked back.

Many thanks to Galloway MRT for helping in an incident that genuinely changed my life for the better!

Mountain Rescue and COVID – how have we adapted and are finding solutions for the longer pandemic….