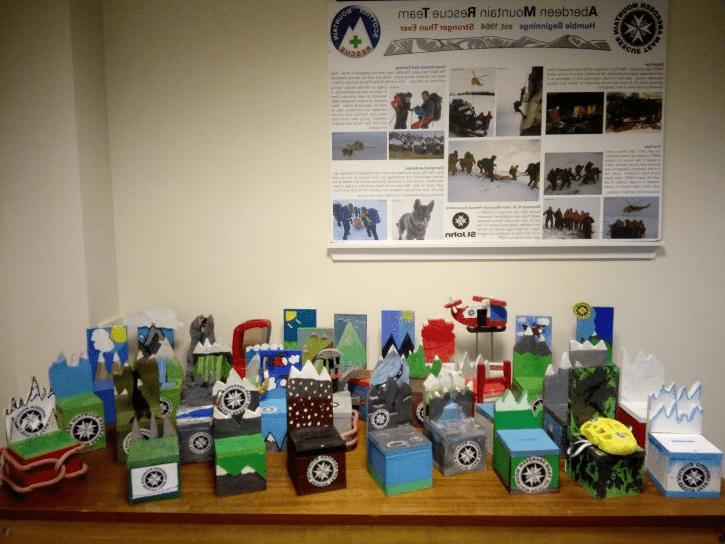 Fundraising efforts of Aberdeen Mountain Rescue have been given a boost by the work of Hazlehead Academy pupils.

Aberdeen Mountain Rescue Team recognised the need for new collecting boxes. With this is mind Aberdeen MRT thought is would be an interesting community project for a local school. Hazlehead Academy was approached and they jumped at the idea to help out.

Two S3 classes have been guided through the process of designing and building boxes for the team – literally from the drawing board – by their teachers Joe McTaggart and John Lorimer.

S3 pupils Megha said, “We had a lot of fun learning about the AMRT and it felt great to design a charity box for a great cause. We really enjoyed designing and painting the boxes and we felt that they all looked great in the end.”

S3 pupil Finlay said, ”I really enjoyed producing the Aberdeen Mountain Rescue charity boxes. We were all helping each other. When we moved on to the workshop part I couldn’t wait for Techy to further the making of my box. Overall this was the best activity we did in Techy and we all liked the fact that it was going in to real shops for a great cause.”

Deputy Team Leader and Hazlehead Academy teacher Kenny Webster said: “The links between Hazlehead Academy and AMRT are long standing and we are delighted that the work of the team has so captured the young people’s interest and imagination. Traditional collecting cans remain a vital income stream for AMRT and we are very much looking forward to seeing these exciting new boxes go in to local shops.”

Contact Kenny at Hazlehead Academy if you would like to display one of the boxes at your business.

Mountain Rescue and COVID – how have we adapted and are finding solutions for the longer pandemic….