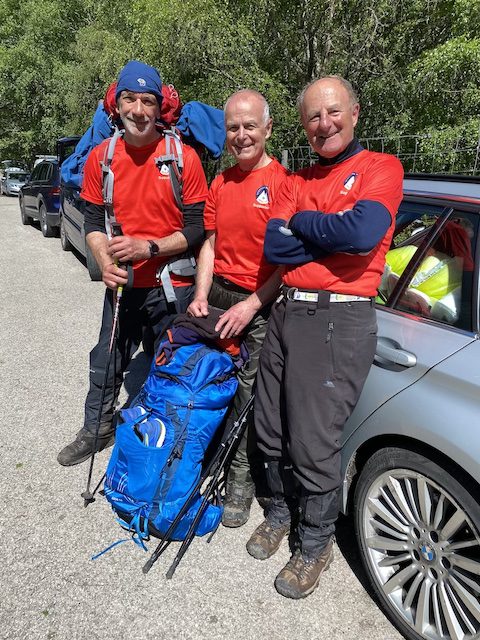 Walk to Nowhere . . .  A walk to Scotland’s most remote point on the mainland

On 31st December 2019, just before lockdown, I was on holiday with my family in Wester Ross. Along with my daughter Sara and her partner Matt we decided to go on a favourite walk from Tollie Farm (Poolewe) to Slatterdale, which goes over the mountains and down to Loch Maree. We had been walking for about one and a half hours and had just climbed over the shoulder of Meall an Doirein where the track is quite hard going with large rocks to climb around but, perversely, it was on the easier descent to the shores of Loch Maree when my foot caught in loose rocks and I tumbled forward, landed on my side on a larger rock and broke my hip. The track was running with water and I could not move. There was no signal in this remote spot, so Sara climbed back up the hill and called for help while Matt pulled me out of the running water and rested me on the bank.  I was cold, soaked, in great pain and soon began to shake, despite Matt trying to keep me warm. We had prepared well for the walk with good boots, were well clad and were carrying snacks. We had taken care but it brought home to us how easy it is to have an accident in the hills and the Scottish Hills are more dangerous than they look. The rescue team had difficulty finding us but, in an hour, we saw it in the sky – I was never so pleased to see a helicopter. Because it was boggy around us, they couldn’t land but a wonderful man called Norman dropped down on a winch and presented me with a “wee green whistle” as he called it and told me to suck it.  I guess it was laughing gas. He explained he would put me into a harness (like a large nappy) and we would be winched up together into the helicopter. With a broken and displaced hip, I said (with a few expletives) that it did not sound like fun, and it turned out I was absolutely right!!

Now, as you can imagine, 31st December (Hogmanay in Scotland) is not the best time to arrive in hospital, but I have to say that Raigmore Hospital in Inverness were fantastic and did everything they could to take away the pain. It was so busy that it was 2 days before the surgeon could put me back together again. Two and a half years later I am almost back to total mobility.

Both organisations did a fantastic job with wonderful people involved and so I would like to do a little in return for all their help, kindness and dedication.

Accompanied by two good friends Richard and Chris and with a joint age of the best part of 200 years we decided to walk to the most remote point in Scotland. This point according to Ordnance Survey is in the Northwest Highlands, Grid Ref NH02020 77000 at a height of 610 meters on the side of a mountain among the Munros of Fisherfield Forest – a dramatically beautiful wilderness. The return journey is some 33Km and involved us in two overnight stays at the remote bothy of Shenavall. Even in good weather this is a challenging walk with bogs to negotiate and two rivers to ford – there are no bridges so – its boots off – AND of course we had our rucksacks to carry with tents in case the bothy was full.  Richard came with me in December 2021 on an exploratory walk up the first part of this route to the top of the climb alongside the corrie at An Teallach.  The majesty and remoteness of this area and its rugged terrain can be seen in the photograph. As a result of Richard’s meticulous planning and navigation the walk was a great success. Chris, the youngest of us kept us in great humour and on the second day did the heroic task of carrying a joint rucksack the whole way which meant we could then keep up with him! The first day was a 5-hour walk from the car park at Corrie Hall to the bothy. On the second day we climbed to the most remote part of Britain (610m high), which was an 8 hour return journey. On the third day we returned to the car park but decided to climb into the corrie of An Teallach but had to stop on the shoulder of this great Munro as winds were gusting to 70mph and we thought it too dangerous to continue, but the views were truly magnificent.

I can recommend this challenge to anyone reasonably fit. The time of the year is critical though. The weather for us was changeable but the second day was brilliant with strong sunshine and a cool wind, and we met with very few problems. With heavy rain though, the rivers can be too difficult to cross and, in the winter, this would be a very difficult challenge.

We had a truly memorable time and raised over £1700.00 plus Gift Aid for Scottish Mountain Rescue.  A big thank you to Just Giving for their support and to SMR for the T-shirts!

Scottish Mountain Rescue, and the 25 teams it represents across Scotland, would like to thank Robin, Richard and Chris for coming up with their inspired challenge to raise an amazing amount of money for mountain rescue.  Thank you!

999 ask for Police then Mountain Rescue