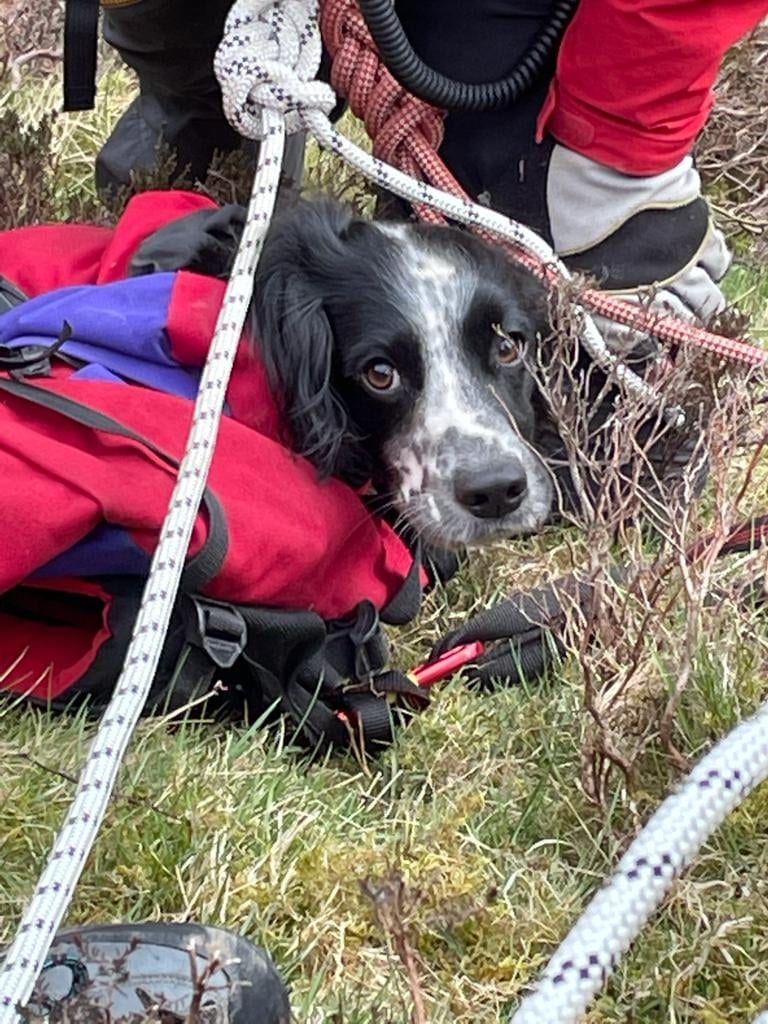 On the 14th of April this year Moffat Mountain Rescue Team were called to an unusual rescue. Louis the Springer had fallen down steep slopes whilst walking with his owner above the Grey Mare’s Tail.

At approximately 13.18  on the 14th April we got a message  from the Moffat MRT Team Leader asking us to meet at the Grey Mare’s Tail car park. There was a dog that had fallen and got stuck on a ledge.

Two team members were asked to go up the opposite side of the tail burn and water fall to see if they could locate Louis by looking across to where he had fallen. As this was going on, the rest of the team headed up the path on the right hand side of the tail with all the equipment hoping by the time we got near to the top the lads on the opposite side would have located Louis.  It took quite a while for the two team members to get to the point where they could see across to roughly where Louis had fallen.  Then it still took a bit of time as he was very difficult to see.

Once he was spotted we were guided into roughly a point on the path above where he had fallen.

To get to Louis we decided to set up technical lowering system from the path down to where Louis was. 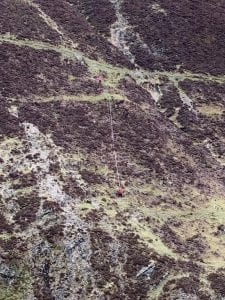 I was then lowered by team members down to where Louis was, just to one side of him to make sure no rocks or debris fell on him as I was lowered down. Once down and able to see him I then made a decision to go past Louis and to one side and approach him from below. Once in position directly below him, I tried to approach him but this made him panic. I was concerned he would try to move and as he was now on a ledge with a vertical drop below him he might fall.

I was now hanging on two ropes just below Louis with my head level with him. This was the difficult part because if it had been a person I would have been able to speak to them and give instructions on how they could help me rescue them. I still tried to talk to Louis, hoping he would stay calm and let me get a hold of him. Every time I got close he started to panic and get stressed. It took about 20 minutes to gain his confidence and let me get closer to him. I was also concerned that he might bite me as he was frightened and very stressed. I eventually got myself into a position where I could go for it and just grab him. 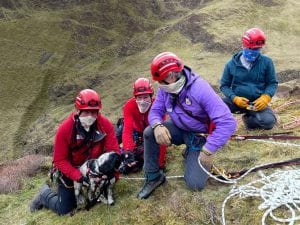 I knew, I might only get one chance at this so it had to be right, thankfully it worked. I was able to get a hold of him and secure him to one of the ropes that I had been lowered with. I then had to try and get him into a large rucksack that I had brought down with me. This proved a difficult task but I managed to get him in, with his head sticking out the top. He seemed to calm down once he was in the rucksack and attached to one of the ropes.  At that point I then felt the worst was over and the team members above me would be able to pull us back up and they did. Once back up and on the path we all made a fuss of him and it was as if he knew he was safe. All the kit was then dismantled and we all walked down to the car park with Louis on a lead. 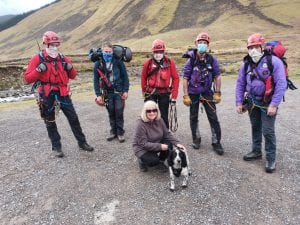 It was a great feeling for all of us to see Louis reunited with his owner’s .