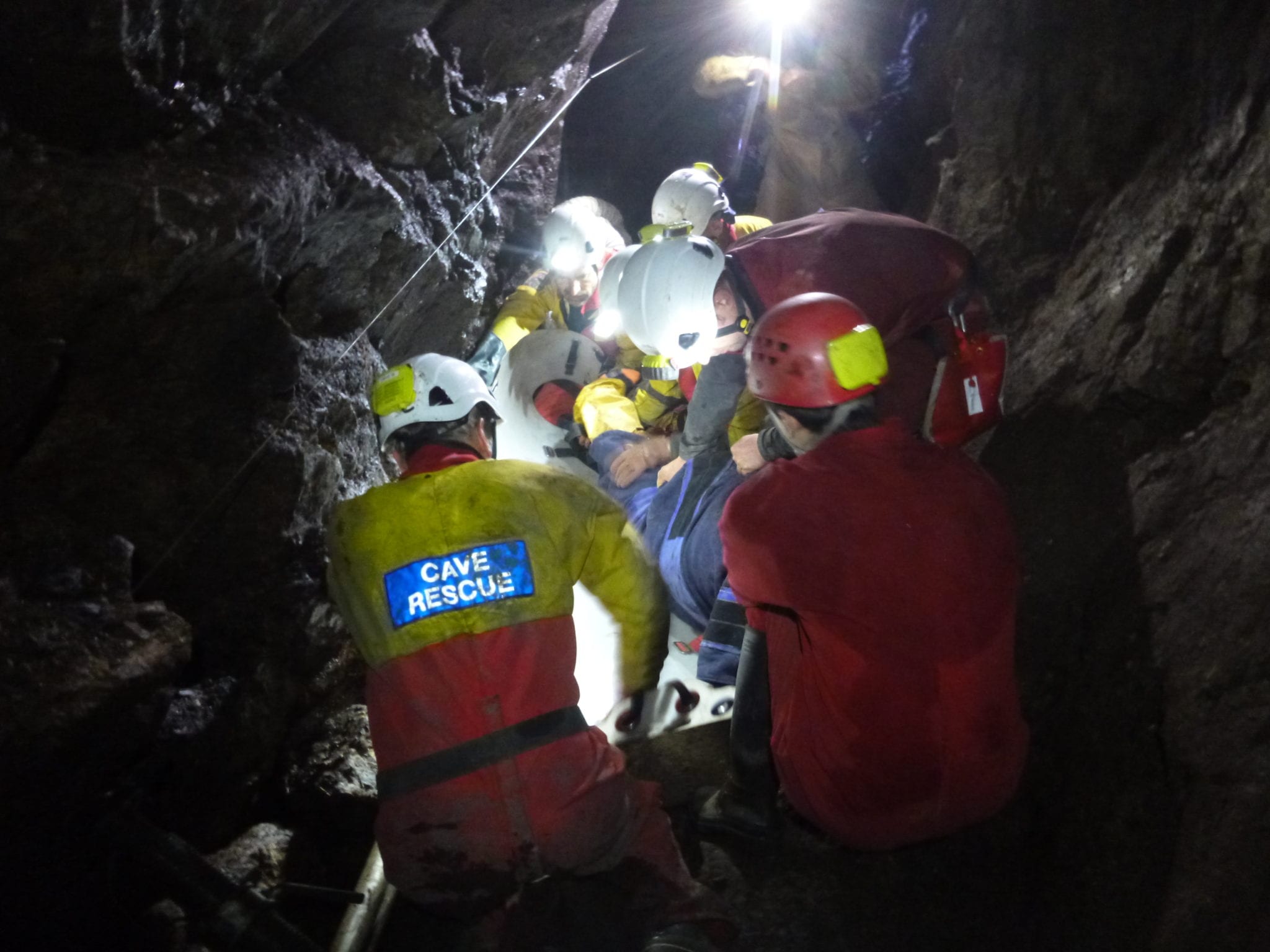 There is no greater feeling of satisfaction for an explorer than revealing somewhere no other human has been since the dawn of creation. It crowns his curiosity and contributes to geographical knowledge. It is the basic driving force for cavers everywhere coupled, naturally, with all the fun of strenuous athletics such territory demands. The absorbing task of following mountain streams from sink point to emergence engages mind and muscle, trending as much to science as pastime.

Sometimes however, curiosity kills the cat. It is undeniable that cave exploration throws up hazards of a particular nature that can only competently be dealt with by experienced cavers. Even casual expeditions underground may involve almost total immersion in cold water, often with a passage roof only centimetres above one’s head, sinuous routes through boulder piles threatening movement if kicked by the unwary, or vertical descents, frequently drenched by stinging waterfalls. Immediately it will be obvious that even the most trivial of injuries, say a badly twisted or broken ankle, really nothing more than an inconvenience on the surface, will have serious consequences below ground, where an immobile casualty has to be carried through such obstacles and risks of exposure multiply as time goes on. Weather conditions too affect rescue operations: downpours feed streams that can trap parties beyond low, tight sections and impede rescue efforts.

Dedicated cave rescue teams were first created in Yorkshire before the Second World War and as the sport expanded, other regional teams came into being, covering the whole of England and Wales. Scotland was slow to catch up. Caves are common here, mostly coastal or ‘historical’ in nature; ‘proper’ mountain limestone systems have really only been explored properly since the late 1940s. Geographical enclaves are found principally in western Argyll, Skye, Applecross, Assynt and Durness and, despite their being smaller than their English and Welsh cousins, the caves pose just as great an extraction problem should the unthinkable happen. Thanks to persistent work by native caving clubs and resultant publicity, visits to Scottish caves are on the increase. All the usual threats to well-being will be encountered – exposure, flood risk, boulder movement, falls, becoming lost or benighted due to equipment failure – and it was perceived that a cave-experienced rescue team would inevitably be required at some point.

In the mid-1960s therefore, Edinburgh-based cavers founded the Scottish Cave Rescue Organisation (making it, incidentally, one of the oldest extant rescue teams in Scotland). Although initially based in the capital, it was prepared to go anywhere to deal with a ‘shout’, and today involves active cavers from all over the country. The first two decades were reasonable quiet. In the central belt there are large numbers of abandoned stone and metal mines, the former by design extremely complex mazes of square stone columns covering thousands of square metres. Several call-outs dealt with parties of schoolboys predictably lost in such mines, the searching of which is an artform not yet perfected.

However, Scotland is a sizeable bailiwick for one small team. Time is always of the essence, and obviously first call should go to the relevant local Mountain Rescue Team. Simple incidents can thus be dealt with speedily – much to the relief of the casualty! Cave Rescue can be put on standby and will attend, by air transport if necessary, to tackle underground operations where specialized equipment and knowledge are required. This, incidentally, quashes the public perception that ‘other people’s lives are put at risk in cave rescues’. Only experienced cavers go underground – to rescue their own, if you will. They are accustomed to territory they visit for recreation and thus competent to operate in it safely without hindering fellow team members.

Nowadays technology and custom-made equipment have transformed how cave rescues are performed. The old-fashioned stretcher lift and carry can be facilitated by rigging sophisticated rope works, and casualty care has been greatly enhanced by new medical procedures. Cave stretchers are now a streamlined ‘wraparound’ design for easy movement through narrow, awkward spaces, even if spinal injuries are suspected. However, all this improvement demands practice. SCRO holds two major exercises each year and ancillary training where appropriate. One of these exercises usually involves an abandoned mine working. The team prefers to work in partnership with local Mountain Rescue teams and arranges joint exercises to familiarize them with equipment, methods and, crucially, cave systems in their territory so they can intelligently assess what needs to be done and alert Cave Rescue accordingly or deal with the matter themselves.

Over the last 50 years, SCRO has, thankfully, not been employed at too many serious incidents. There have been fatalities – mostly due to the consequences of exposure to cold water – and at least one party has been trapped by floods. Lesser events have involved twisted ankles, injuries from falling boulders and small falls. In any cave accident it is immensely preferable if a casualty is able to walk under his/her own power; not only does it save time and effort, it boosts morale and keeps the subject warm as well. On occasion, team members have also been employed by the police in missing person searches. Such places as stream culverts, drains, old wells and mine shafts, are all locations cavers are comfortable examining. The tragic fatality down a Galston mine shaft in 2008 illustrates how accidents can occur in the most unlikely places, but where caving expertise could be employed. In fact, the only places specifically excluded by Cave Rescue are deep collieries and shale mines where instability and foul air are present by definition.

Caving is generally a safe, enjoyable pursuit, so long as participants observe common sense and use the underground environment with care. Parties do need to bear in mind that technical help may be a considerable distance from the cave in question, so giving early, accurate description of an accident to the police is vital. Observing the caving code entails leaving information on your activity with someone, providing an estimated time of return and crucially, carrying a simple first aid kit with you. Any contact with SCRO can be made via the police, asking for ‘Cave Rescue’ and giving details of what has happened. Keep an eye on the weather and avoid going into ‘active’ caves if heavy rain is forecast. Scotland’s limestone caverns provide us with a wonderful natural landscape of rock, calcite formations and water, but they have to be treated with respect. Nobody invites injury but accidents do happen and if/when they occur, SCRO is here, ready to help.

Alan L. Jeffreys has been exploring caves for 60 years. He founded the Grampian Speleological Group, Scotland’s premier cave exploration club, in 1961 and has discovered new cave passage in many parts of the UK and abroad. In 1966 he co-founded the Scottish Cave Rescue Organisation and was until very recently its Chairman. No stranger to accidents himself, he has survived a few injuries incurred whilst caving, and therefore shares an affinity with the plight of potential casualties.