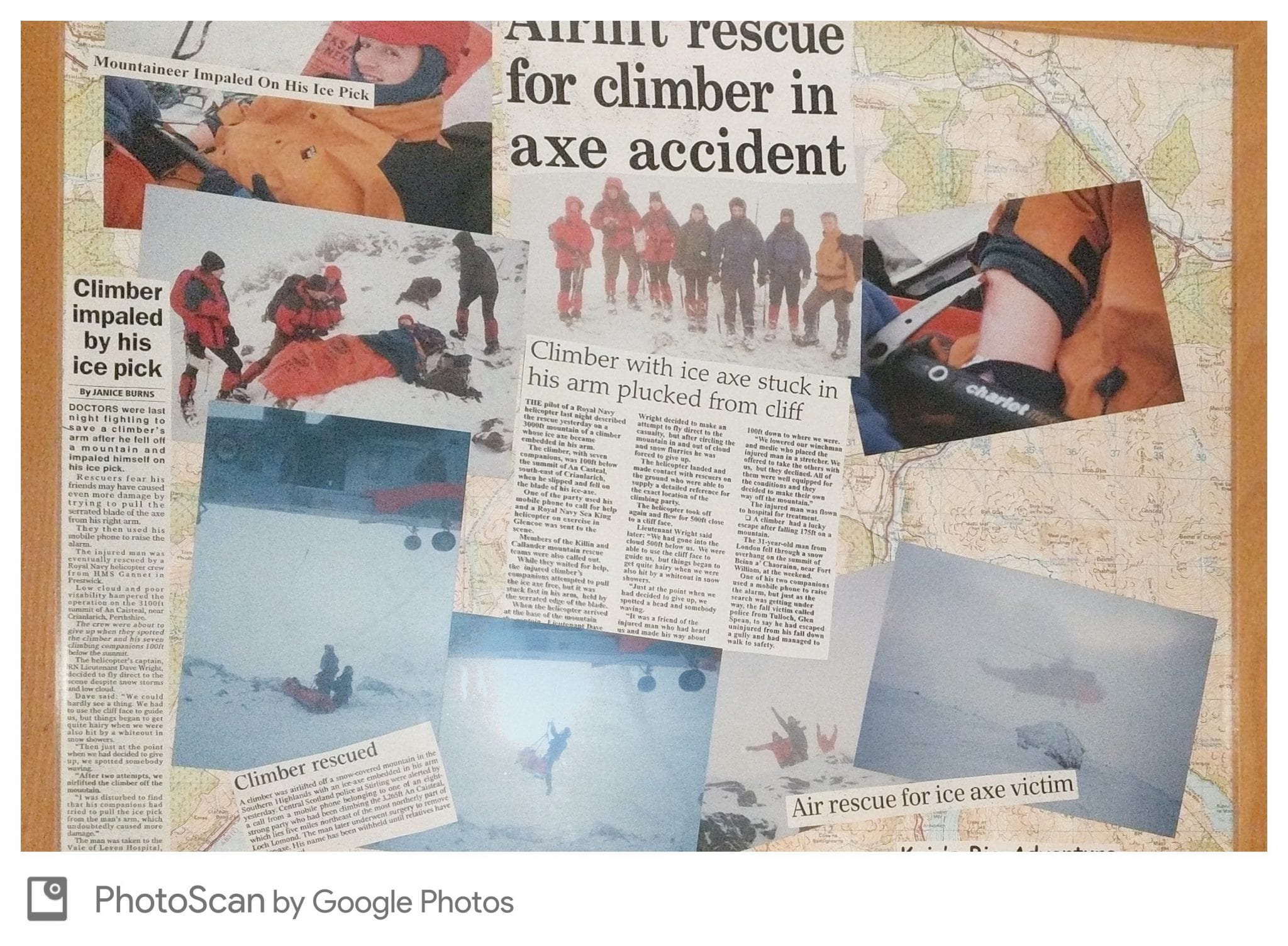 Tell me a little bit more about yourself and who else you were with when you were rescued?
I was the one with the ice axe in my arm. We were a fairly large group but I only knew two of them but I got to know them better that day. I was a bit of a “hanger on” to the group as they were all part of a mountaineering group and I’d just tagged along. I’d even travelled up separately as I was living in Dunblane and they’d all come from Edinburgh. Not sure why I didn’t meet them somewhere but I was probably planning to go and see friends up north that evening.
The two friends (Lach and Lynne) and I (Keir) had all met up at Aberdeen Uni and we’d all ended up working in outdoor shops by the end of our time there. We gained a fair amount of hill experience there and have done a fair amount of exploring both in the UK and elsewhere. Lach and I have best man’ed for each other and happily still get to spend weekends here and there up in the hills.

What were the circumstances that led up to the rescue?
We’d headed up An Casteal (Crianlarich area) on the 9th of Jan 2000. The forecast was reasonable but was due to clag up as the day went on and so we’d headed off at first light to try to get some view from the top. It was one of those days where you could see the snow from the car park but were standing in mud. It was a bit of a slog up and we seemed not to find a nice path until we were pretty high but we made it up, got a view and had some lunch. Snow cover on the top the top was like most Scottish mountain tops, deep in hollows but blown off over large areas. I was kit phaffing and was last to get moving after lunch and was zipping up my coat and took a small drop (a metre or so into a hollow) expecting to land on smooth ground but instead the tails of my crampons landed on a rock in the hollow and this sent me into a forward roll. I actually remember thinking I could summersault out of it and get back on my feet easily. Instead I was left sitting in the snow and had a sore arm. It genuinely hardly hurt but I had put my axe into my arm.

When you realised it was an emergency and you might need help, how did you feel?
I was not in pain and was actually determined that we could walk out of it but the folk I was with were equally adamant this was a bad idea. They were right. This wasn’t a technical climb but we had needed the iceaxes (walking ones) to get there and going down you are always more likely to trip. I’d always felt that if I was going to need to get rescued off a hill I would be doing something a little more on the edge with ropes, falling rocks and danger, not zipping up my coat.
I felt like I was still pretty together and the group I was with kind of reassured me. We had more kit than most and it was decent kit. I am sure that there was lots of discussion going on out of ear shot but the folk I was with were also pretty calm (it turns out two of them were retching just at the thought of what I had done).

How did you call for help/ involve the mountain rescue?
This was back in 2000 and mobiles weren’t that common. I had a giant chunky Ericson one. A couple of the others did too but mine was the only one that got signal however it only had one bar and that bar disappeared as soon as I passed the phone to anyone else. We joke that it was because I had a large metal axe to aid the signal. I remember calling 999 and asking for mountain rescue and them saying that it wasn’t one of the services I could choose and then getting quite panicked but one of our group shouted to go to the police which I did who linked me to mountain rescue.

How did mountain rescue help? What actions did they take and how did you feel throughout the rescue?
Mountain Rescue coordinated the whole exercise and also had a group heading up the hill but I was picked up by a helicopter from HMS Gannet (Prestwick). They had been doing an exercise locally and just left the poor guy on the hill to come and get me however by then the clag we had been expecting had come in and visibility was poor. Within 30mins of the call we could hear the blades of the helicopter and it seemed to be coming and going but it never appeared. It then went silent. I can’t remember if we called 999 again or whether they called us but we then had a conversation about the lay of the land around us. It turned out that the helicopter crew were discussing the hill with the mountain rescue guys and working out what they would be able to use for ground reference. When we had first heard the helicopter the relief was immense but now not hearing the helicopter really was making me panic, I was also probably starting to get cold and I was also worrying that we were going to be walking off the hill in the dark. We knew rescue was on the way in some form so some of the party were sent off down the hill but I still was determined I could walk off the hill. I had an idea that I could get the axe out if I could just unhook the barbs and tried to see if I could put my finger in to release it but to no avail (and probably lucky I didn’t move it). I remember clearly having a conversation with Lach and Lynne about how cold their flat was. No idea why I was being so judgemental but it did pass the time. Light was fading but we heard the rotor noise again and it started to do that, get closer and further away, multiple times but then we spotted the strobe off the bottom of the helicopter well beneath our location. Lynne ran down the slope and her tasteless green jacket was spotted by them and they used her as a ground reference as she walked the helicopter back up the hill. I had presumed that was it and we’d be off but it took a while more but I have to admit things get a bit vaguer from this point on. I was in the hands of the rescuers and the adrenaline dropped and I remember someone commenting that I was looking very pale. It couldn’t land so I was put onto a stretcher and I remember asking if Lach could come with me and they were adamant it was too dangerous to lift anyone else which at the time didn’t worry me but thinking about it afterwards I understand how touch and go the conditions were for the helicopter. I got winched up and I remember a few things about that. A random blast of hot air, screaming when something caught the axe and it was moved in my arm (this was the first time it had properly hurt), and getting sat up in the helicopter to look out the window. My friends meanwhile had a headtorch walk back to the cars and poor Lach had to drive my dreadful car home and call my sister and tell her what had happened to me.

What was the outcome of the rescue?
I was flown from the hill to Vale of Leven hospital where a very young doctor gave me loads of morphine and then had a go at getting it out but ultimately failed. Things get very blurry from this point on but I was warm and I was safe. At some point in the night I was transferred to Paisley General as “they were more experienced with stab wounds”. The next morning another doctor had a go at getting it out and also failed. It was that afternoon that I went under general anaesthetic and they got it out. I was stuck in hospital for a further 8 days and signed off work for 6weeks. In the end I got myself signed back onto work well before that (I never knew you had to get a letter from your doctor for that). My arm is remarkably completely undamaged with just a minor blemish. My iceaxe is equally undamaged.

What difference did this make to you?
I was alive! It wasn’t however a major turning point in my life but it did make me get a full time job rather than being on contract. Thankfully once the iceaxe was out of my arm I didn’t suffer any long term damage. The surgeon suggested it was almost impossible to do what I did and not damage anything but that was probably just to make me feel better about being such a fool.

How did you feel about the support that you received from mountain rescue?
It wasn’t mountain rescue but I know they were instrumental in making it happen and were also on their way should the helicopter have failed to pick me up. I can’t say it often enough, I am indebted to them and the Royal Navy.

How did the rescue impact on your life?
Remarkably little and I am very grateful for that. I was asked when I was in Paisley whether I wanted to speak to someone from the press or have my name released and I said no. The stories that made it into the papers varied from just listing the few facts that the Royal Navy must have released through to sensational stories which must have been just from the journalists imagination. This did make me realise that what you read in the papers is often down to the imagination of the journalist.

The Importance of Planning for your Adventures